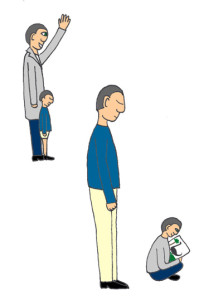 “When Eric was born, he looked like me so much! He was supposed to receive the best from my background but nothing of what had been bad about it. Being home during my paternal leave was sheer delight. His first words were ‘uppa’. I was sure he meant ‘Papa’. Then I realised he meant ‘up there’, where he was lamp in the ceiling! I did cope with it anyway. It was more difficult when Eric began to distance himself from me. In those days, I was playing in a football team. I wanted him to become a member of the junior section. But my four-year-old boy just wanted to read books about dinosaurs! Proudly, one day I told him that it was an Englishman who discovered such creatures. Eric became sore and told me it was his books and that I should ask him before opening them.”

Imagine that such a little person can make a big and strong guy feel humiliated! Connor says of himself: “I overreacted”. How are we to understand his reaction?
Connor carries on: “When I was a child, my father used to correct me. Now, I am an adult man and one day I experienced being corrected by my own son! Some time ago I lost control. My football team had lost a match and Eric said something nasty to me. I got the impression that he and my wife were having a laugh at me. I was damned angry and smashed his book on the floor. He started crying and my wife got upset. As for myself, I did not come out with any smarter idea than taking a jogging tour around the neighbourhood…”

Evidently, Connor wants to give his best to Eric but old patterns are preventing him from doing it. Whenever he feels that Eric is trying to be on top of him, Connor does things like his father used to do. He gets hurt and angry. He knows it is wrong but cannot find any better way of handling the situation. Connor’s ghost from his English childhood has concealed itself at home and now is popping up from time to time. He has no good internal model of how a father might maintain his authority in a loving a decisive way – and how one might put up with being told off by a four-year-old kid.

Will Connor and Eric handle this by themselves or will they need help from someone else?

The answer depends on how flexible Connor is. It depends on to what extent he can look at himself in a humoristic way and relax when his feelings overpower him. The answer also depends on if little Eric can take the offence that his father is stronger and more knowledgeable than himself. This is a challenge that every child must handle. Last but not least, the answer depends on what kind of support he receives from his wife. It is not easy. She says: “Sometimes it feels as if I had two four-year-old boys at home”. Is she able to understand that sometimes, there is a four-year-old child in every adult man in the world? Well, in every woman too, for that matter.
Back