The project issued from the Child and Adolescent Psychiatry Unit, the Institution of Women’s and Children’s Health, Karolinska Institutet, Stockholm. My supervisors, the professors Per-Anders Rydelius, Rolf Sandell och Andrzej Werbart and myself agreed on a design. I recruited 80 mothers with children below one and a half years of age. They had reported problems either at their child health centre (CHC), at the Nursing Service in Stockholm, or at parental internet sites. I interviewed them and, upon their consent, they were randomized to two groups of forty mother-infant pairs each: either MIP (mother-infant psychoanalytic treatment) or contact just with the Child Health Centre (CHC). The latter is the common form of health care provided by the Swedish Health Authorities. It is a rather well-qualified and defined way of taking care of mothers and babies. Mainly, it is done by nurses but it also contains visits to paediatricians. 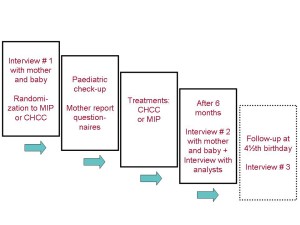 All the babies were examined by a paediatrician and continued with their CHC visits. In addition, the MIP group received treatments by specially trained psychoanalysts. These treatments normally lasted two or three months with two or three sessions a week. After these treatments, I made a follow-up interview six months after the first interview.

Results: The MIP mothers had better results regarding mother-reported depression. Similarly, their relationship with the child (PIR-GAS) and their sensitivity for the child’s signals (EAS) was improved in comparison with the CHC mothers. The differences were statistically significant, while a near-significant effect was also found on mother-reported stress. It thus seemed that MIP was a suitable method for this kind of problems. However, which kind of mothers and babies where the ones who profited the most from this method? This was the next step in my study.