Lena is talking about her mother: “We are very close – and we quarrel. I can read how she is feeling. As a child I wanted to help her. Yet it did not feel good when Mom used to start crying in front of me. But I still loved her though. Nobody had got such tender hugs as she”.

Lena carries on talking about her daughter Mimi, 10 months: “I can’t relax. Still, when Mimi falls asleep and holds her hands in my hair, it’s so cosy. But is she too close with me? What if she gets too dependent? What is a good distance between mother and child? Do I pay too much attention to her?”

What about work? “Super efficient, for five years I have been off duty for three days only. Everybody likes me. However, Katarina, my boss, she is about Mum’s age, sometimes tends to shake her head and adds that I am burning my candles in both ends.”

What are Lena’s problems? Why does she become too stressed with Mimi? Why is it difficult for her to enjoy being with her daughter? 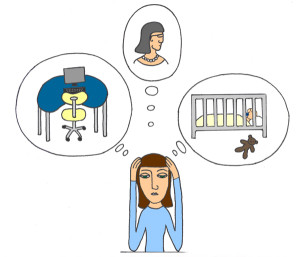 Perhaps, it is Mimi’s “grand-mother-ghost” which is at work here. Lena learned from early on to take care of her Mum’s feelings. Quickly, she became independent. The price she had to pay was not known to her until she became a mother herself. Now she wants to support Mimi to develop at her own pace. But what is “at her own pace?” What does “support” mean? Lena is not sure.

When a woman becomes a mother, her emotionl bonds with her own mother often get strengthened: “We have become mates, my mother and I”, says Lena. However, unfortunately the grand-mother can’t help Lena to be a grown-up parent with her child. This is because the links between mother and daughter are too enmeshed. Lena needs support. Her partner is trying to help her, but sometimes the problem is too heavy: “You need to see a psychologist, it’s not enough to talk to me”, he says. Lena: “SO I AM CRAZY?” “No, Lena, crazy is not the right word”, and crazy is probably not what her partner Lars meant. But she needs to adjust to her role as a mother. This process is tangled with a thousand threads to her mother. Lena cannot see them. She just feels terrible when her mother gives her points of view on how Lena is taking care of Mimi. Then she just wants to be alone. However, if Grandma pulls back a bit Lena feels abandoned: “Mum, why don’t you call me?” “But you told me you wanted to be alone for a while!”

What about Mimi. How are things working out for her? She is a nice baby but clings to Mum a lot. Mimi does not want to let go of the breast and looks with an imploring gaze at her mother. She’s crying at bedtime. Lena does everything to provide a safe attachment to Mimi. But things get easily tense and then they do not reach each other. 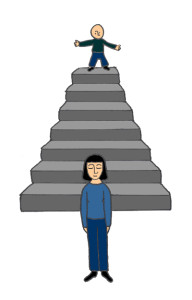 Maybe, what we see in Lena’s case is a “ghost in the nursery”, as the child psychoanalyst Selma Freiberg expressed it. Such a ghost arises from messages that are transferred invisibly between the generations. Lena has been annoyed with her mother and therefore kept her at some distance. But, then she felt bad and concerned about her mother’s well-being. Today, Lena and Mimi are wrestling with similar feelings. Perhaps Mimi is asking for help by whining, which we guess means something like: “Mummy, be clear, tell me what I am supposed to do and not to do, and what you want and don’t what from me! Such things would make me feel more secure!” But meeting up with Mimi’s demands is not easy. The ghost in the nursery, Lena’s troubled relationship with her mother, puts up obstacles. Being together is nice – until the irritation of being encaged with Mimi comes back. Being independent is also fine  – until Lena feels abandoned and guilty. Parent-infant psychotherapy is a possibility to talk about these things.