Psychoanalysis with mothers and infants 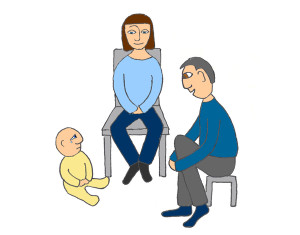 What has a psychoanalyst got to do with babies? To be true, we tend to have ideas about how childhood experiences affect our adult life. But an analyst treating a crying baby and a worried mother? After all, psychoanalysis is all about words, isn’t it? Indeed, I tended to think that way at first. Today, after years of intensive work in this area, I find many arguments why therapists should be interested in these treatments:

The therapist’s challenge is to get in contact with mother and baby and get an idea about which emotions are encased in the symptoms – whether in mother and/or baby. Sometimes, one needs to focus on the relationship between the parents. Alternatively, one needs to shift focus during various phases of the therapy. Either way, the therapist uses intuition, empathy, and knowledge to help the young family.

If you want to know more about this way of working you can order material by mail to:info@psykoanalys.se. Johan Norman also wrote two scientific papers which you can order here and here.

Now I became interested in writing about my experiences of this method. If you want to know more, go to the next page or read my paper in English here: salomonsson_mother-infant-workimplic-adult-work.